I Am Right You Are Wrong 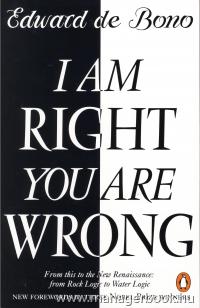 In this book Dr Edward de Bono, who is well known world-wide for his origination of lateral thinking, puts forward a direct challenge to what he calls the rock logic of Western thinking. Rock logic is based on rigid categories, absolutes, argument and adversarial point scoring. Edward de Bono believes that this thinking cannot provide the constructive energies that we are going to need in order to solve problems and create a better future. Instead of rock logic he proposes the water logic of perception. Drawing on our understanding of the brain as a self-organizing information system, Dr de Bono shows that perception is the key to more constructive thinking and the serious creativity of design.
Edward de Bono expects his ideas to outrage conventional thinkers, yet time has been on his side, and the ideas that he first put forward twenty years ago in his book The Mechanism of Mind are now accepted mainstream thinking. Here, in this brilliantly argued assault on outmoded thought patterns, he calls for nothing less than a New Renaissance.