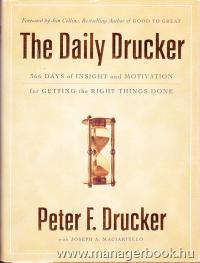 Peter F. Drucker is the original big thinker. And not just about management. Drucker's ideas about innovation, leadership, effectiveness, and adapting to change still stand as elegant classics of business wisdom.
Now, for the first time, Drucker's most powerful ideas have been assembled in one place- The Daily Drucker: Culled from his lifetime of writings, The Daily Drucker presents the keys to his thinking and pulls together his remarkable body of work. But this book serves as more than an explanation of Drucker's writings- it is a call to action. As Drucker himself writes, "The most important part of this book is the blank spaces at the bottom of its pages. They are what the readers will contribute: their actions, decisions, and the results of these decisions. For this is an action book."